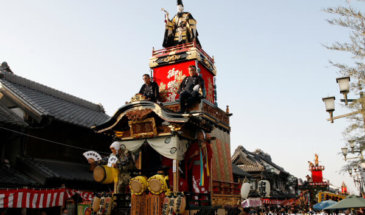 Take a trip back to Edo period Japan

The town of Kawagoe, situated around Kawagoe Castle, is rich in history, and is known to have been settled since the prehistoric times – its namesake is a warrior who lived in the 13th century. Settlement as a castle town began with the construction of Kawagoe Castle in 1457 under the order of Mochitomo Uesugi by Doshin Ota and his son, Dokan. The town  flourished so much that it took on the nickname of “Koedo” (Little Edo) as it prospered in the same way that Edo, the former name of Japan’s capital, did. Along with its strategic and political importance, Kawagoe is alive with festivals and other religious traditions thanks to its rich Buddhist and Shinto history.

Relish in the sights and sounds of Little Edo on this tour. Be immersed in Kawagoe’s signature architecture; feel the vibrations of rickshaws along the streets; hear the ringing of its symbol, Toki No Kane (“The Bell of Time”), the bell tower that has been ringing out across centuries in the town’s alleyways. Kawagoe is a town full of nostalgic charm, and it wouldn’t be out of place if samurai were to appear… One of the highlights of the Kawagoe “Little Edo” Tour is its enriching cultural experiences, such as kimono wearing; tea ceremony; geisha; visiting a sake brewery and soy sauce factory; traditional arts and crafts. There’s something for everyone to enjoy.

What is most remarkable about Kawagoe is its streets lined with well-preserved buildings built between the late 19th century and the 21st century. The most renowned of the streets, Kurazukuri No Machinami, is easily accessible from JR Kawagoe Station. This unique architectural style, known as Kurazukuri, is fire resistant and became a popular building style that was quickly emulated in the Edo Period. However, these buildings can no longer be found outside of Kawagoe, leading to the town’s national designation as one of  “Japan’s Top 100 Historical Sites” and “Preservation Districts for Groups of Historic Buildings”.

In the centre of Kurazukuri No Machinami is Ichibangai, a 400 meter long promenade lined with buildings from the late 19th century. It is worth noting that these buildings are not replicas, but rather the real deal, a rare sight for Japan’s Kanto region. Kawagoe managed to escape the wrath of nature with the Great Kanto Earthquake of 1923, and escaped the 1945 firebombing of World War II.

Nearby, Taisho Roman Yume Doori can be found, built in the early 20th century, it is a street lined with structures and has an unmistakable western influence. It is markedly different to Kurazukuri No Machinami; it is like a portal to a European capital. However, the most eye-catching form of architecture in Kawagoe is undoubtedly giyoufu architecture, a style of Japanese architecture popular in the late 19th century that used traditional techniques to construct Western style buildings.
The town is also famous for its festivals. The Kawagoe Festival, held annually in October, is when Kawagoe comes to life. The Kawagoe Festival is one of the most auspicious ceremonies performed by Hikawa Shrine, a Shinto place of worship. Dashi – large and ornate parade floats – are carried throughout town against the dizzying accompaniment of duelling musicians. It takes the residents of Kawagoe nearly a whole year to prepare for this much-anticipated event.

Day 1: A Day Full of History and Kimono Wearing

The first day of the Kawagoe “Little Edo” Walking Tour begins at Ikebukuro Station (participants may join the tour from Tokyo or Shinjuku Station) and head to Kawagoe by train.

Upon arrival in Kawagoe, the first stop will be Honmaru Goten, the sole surviving building of what was once Kawagoe Castle.  After surveying the castle lord’s residence and office, the tour then proceeds to Kita-in Temple, originally part of a three-temple complex built in the early 9th century.

Among the highlights of Kita-in Temple are the 540 stone statues of the disciples of Buddha, known as Gohyaku Rakan. Note how each statue has its own unique facial structure and expression.

Before taking a break for lunch, the tour will also visit Senba Tosho-gu, a Shinto shrine that enshrines Ieyasu Tokugawa, the first shogun of the Tokugawa Shogunate that ruled Edo Japan.

Lunch will be a meal of sukiyaki: a dish of beef and vegetables, served in a sweet and savoury broth, at Sukitei Yoshitora, a 140-year-old restaurant.

After lunch, the Kawagoe “Little Edo” Tour will take a step back in time at Kurazuki No Machi, the town’s Warehouse District and a main street lined with warehouses in a distinct Edo architectural style.

Later, participants will have the opportunity to wear kimono, take photos and wear their kimono while strolling the immaculate lawns of Tantoku Garden.

Participants will have ample time to explore Tantoku Garden before dining on sushi and ending Day 1 of the Kawagoe “Little Edo” tour with an engaging performance by geisha. Participants who rented a kimono may return them the following morning.

Day 2 of the Kawagoe “Little Edo” Tour begins with a walk to Hikawa Shrine, a shrine marked by three torii gates and boasting more than 2,400 years of history.

From Hikawa Shrine, the tour will proceed to Ichibangai Shopping Street, a commercial and touristic street lined with traditional Japanese storehouse architecture. We will then visit Kawagoe Matsuri Kaikan, a museum that houses the massive dashi (ornate parade floats) that take centre stage during the annual Kawagoe Festival.

The visit to Kawagoe Matsuri Kaikan will be followed by an opportunity to enjoy a hayashi performance at Kumano Shrine or the chance to make traditional Japanese candies at Kashiya Yokocho (“Candy Alley”). *

Afterwards, tour participants will head to Yoju-in Temple for a lecture on Buddhism, and to try Zen meditation techniques. This will be followed by lunch: a choice of a vegetarian meal eaten by Buddhist monks or steamed eel.

Participants will have another cultural experience after lunch. Choose from one of four activities:

Later, the tour will take a break in order for participants to freely explore Kawagoe. This break will be followed by a walk to Koedo Kurari, a museum and gift shop housed in a former sake brewery.

Here, participants will have the opportunity to experience the way of samurai or see wagei, a traditional form of entertainment using props and acrobatic movements.

The tour will adjourn afterwards, though participants may eat dinner in Kawagoe or return to Tokyo by train.

*Hayashi performances are held on the 3rd Sunday of the month.

Situated less than an hour from northwest Tokyo, in neighbouring Saitama Prefecture, the castle town of Kawagoe is famed for its streets lined with merchant homes, built in the the distinct architectural style of kurazukuri (fire-resistant homes made with earthen clay walls multiple layers thick and topped with black plaster roofs)

There are no reviews yet.