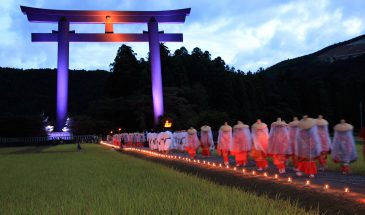 Kumano Kodo is the collective name for the old highway that stretches across the southern Kii Peninsula and connects the areas of Kumano Sanzan (Kumano Hongu Taisha, Kumano Hayatama Taisha, Kumano Nachi Taisha) with Ise, Osaka, Wakayama, Koya and Yoshino. It has been registered as a UNESCO World Heritage Site since 2004.

Kumano Kodo covers a vast region and in addition to the Iseji Route, also includes the Kii, Kohechi, Nakahechi Route and the Ohechi Routes – 5 routes in total.

On the southern side of the eastern Kii Peninsula, the pilgrimage route of Iseji connects Ise Grand Shrine with Kumano Sanzan. It is known for the saying, “Seven times to Ise, three times to Kumano”. Since the Edo period, those visiting Ise would continue their pilgrimage along the Iseji Route to Kumano. The course is known for its variety of natural landscapes. As well as the cobblestone paths and bamboo groves that Kumano Kodo, you can expect mountain passes overlooking the Kumano Sea, as well as some of the best rice terraces in Japan. Not to mention some spectacular views along the Kumano River too. 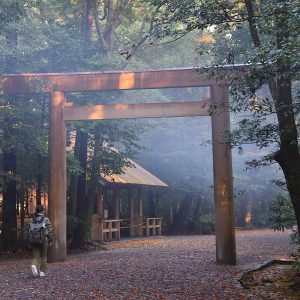 Tour participants will meet at 14:30 at the Shinkansen South Gate of Nagoya Station, before a 5 minute walk to Kintetsu-Nagoya Station. Here we board a Kintetsu express train bound for Ise – a journey that lasts about 90 minutes. After alighting at the historical Kintetsu Ujiyamada Station, participants will board a minibus bound for the Furuichi district (one of five famous red-light districts of the Edo period). In the Edo Period, many of those returning from their Ise-jingu pilgrimages would end up in Furuichi, where they would stay in a ryokan for the night. 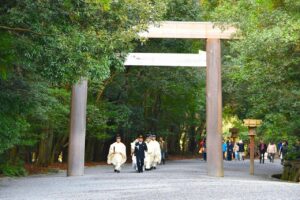 After breakfast we head by minibus to the Outer Shrine, the geku, of Ise-jingu. Here you’ll discover the secluded shrine of Akone-yashiro. This place is considered a secret power spot, and is located adjacent to the Geku Magatama-ike Pond.

In recent years, many restaurants and souvenir shops have opened up along Gekusando, so you’ll be able to grab lunch here before heading onwards to the Inner Shrine (Naiku). After crossing Uji Bridge, we visit a number of shrines in the area, including Taki-matsuri no Kami, Naiku-Kaguraden, Shōgu (Kōtai Jingu), Mishine-no-mikura, Aramatsuri-no-miya, Kazahi-no-Minomiya and Sanshuden.

After paying homage at the shrines, if time still permits, we will freely wander around the districts of Oharai-machi and Okage Yokocho. Here you’ll stumble across several hidden gems, including Japan’s smallest sake brewery, a store specializing in sake cups, and various other food and souvenir shops along the way. 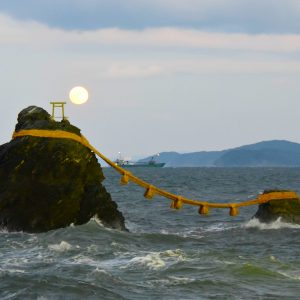 If weather conditions are good with a clear sky, and you are willing to get up before dawn, you might be able to catch a famous view of Japan’s Mount Fuji by walking east along the Futami coast from your ryokan. The famous sighting can be caught between the Meoto-iwa (Wedded Rocks) just as the sun rises. When conditions are best it is an undoubtedly perfect way to start the day.

After breakfast we will head to Futami Okitama Shrine and the auxiliary Ryugusha shrine, before being transported by minibus to Kumano Kodo’s Tsuzurato Pass. For lunch, you’ll get to try a delicious bento from Hajikamijaya Nara, while taking in the surrounding views. 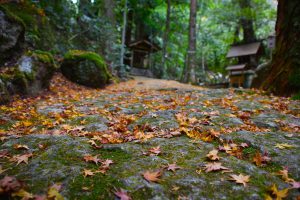 After breakfast, we continue the Kumano Kodo journey with some trekking. You’ll embark on a course that follows the Ikkoku Pass, Hirakata Pass and Kumagaya-michi, while enjoying the views of the Kumano Sea with its elegant, floating islands.

After lunch, you’ll move by minibus to Owase City. Here we explore by foot the traditional fishing villages of Sugari, before continuing along the coast to Kumano’s Onigajō. Catch site of the waves crashing into the many sea caves dotted along the Kumano Sea coast, before the rias coastal landscape further south changes to the calm scenery of Shichirigahama Beach. 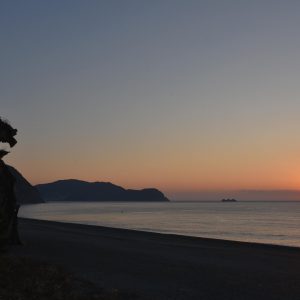 After breakfast we will head to Hananoiwaya shrine, where the deities of Izanami and Kagutsuchi are enshrined. We will then continue our journey along the Kumano Kodo trail.

Fuden-toge Pass was once an important route, connecting the coast with the mountain villages. As you progress along the walking trail, participants will discover the beautiful rural environment of the countryside, along with the surrounding mountains in the Oroshi area. The ancient road here passes through serene cedar forests, where you’ll continue along the moss-covered stone path.

After a lunch break, we will journey deeper into the mountains by minibus. It is here we will find the Maruyama Senmaida – said to be the home of Japan’s best rice terraces. The path through the center of Maruyama Senmaida will unveil a giant rock – the perfect opportunity for an Instagram snap.

For the sixth day, we will continue to explore the three shrines of Kumano Sanzan (Kumano Hongu Taisha, Kumano Hayatama Taisha, Kumano Nachi Taisha), as well as Nachi’s Seiganto-ji temple.

We will begin by heading to Kumano Hongu Taisha after breakfast, before heading to Oyunohara. In Oyunohara we come across Japan’s largest torii gate. Its sheer scale towers over the surrounding countryside.

Continuing on you’ll reach Kumano Hayatama Taisha, close to the Kumano River’s estuary. At the nearby Kamikura shrine you’ll discover the sacred giant rock, Gotobuki-iwa, located on the mountaintop.

After lunch tour participants will explore Kumano Nachi Taisha shrine and Seiganto-ji temple, as well as the auxiliary shrine of Hirō-jinja. We close the day by heading to Nachi Falls. 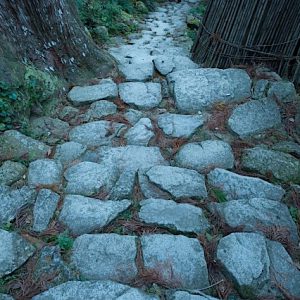 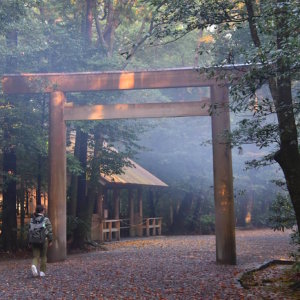 Ise is located towards the south of Mie prefecture, on the southern tip of the Ise Plain facing Ise Bay. The mild climate here makes for an easy living environment, where it is rare to see snow even in the deep of winter.

Ise has prospered as a temple town for Ise-jingu shrine, where large numbers of visitors have made their pilgrimages, known as O-Ise mairi, since the Edo period. In fact, O-Ise mairi is a practice that continues today. 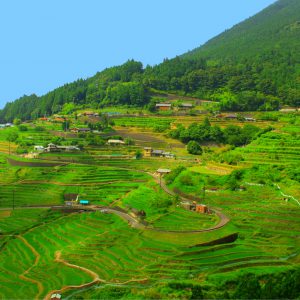 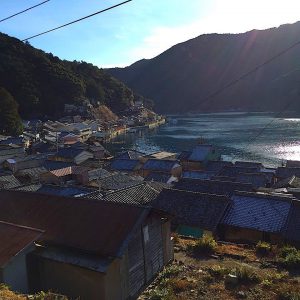 Owase City is located in southern Mie prefecture and is 90% mountainous forest.

With its rias coastline on one side facing the Kumano Sea and its Kuroshio Current, and enveloped by mountains on the other, the region sees warm air blow in from the south amid humid conditions. These conditions cause more rain to fall here than most other areas of Japan. 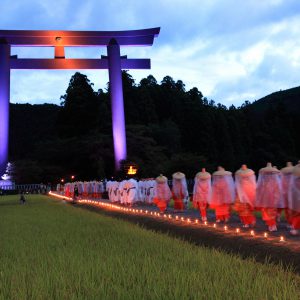 Wakayama Prefecture is a part of Kumano that features many sacred mountains, trails and temples. It lies to the south of Osaka and West of Mie Prefectures.

It is home to the famous Nachi Taisha shine.